If you’ve ever had a conversation with a swimmer which they began: “Coach, I’m gonna quit”… then you will know that it is a day that you will remember.  It may be a bit pessimistic but it may be inevitable for all coaches.  So you should be prepared for it.

If this was something that has caught you by surprise because the swimmer is someone with great promise, then you will need to have a few good motivational tales to sway them back into your fold.  Because everyone waivers at some point. 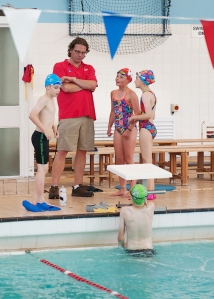 Some conversations are easier than others for a coach. But be sure you know you are an important adult in a swimmers’ life.

Training requires hard work but not everyone adapts the same.  So as a coach you will have explained about the cycle;  ‘hard work = success’, at least a few times.  You will also know that there are highs and lows.  What you are being faced with now, is a swimmer who has reached the end of their comfort level.  They are at a low, a pivotal point and truly a low-low.  Sometimes it can catch you off your guard and without a good anecdote ‘at the ready’ you may lose your prospect.

Prepare for this conversation with an ace up your sleeve.  Something in your past overcoming a difficult time, or someone that you know that also overcame adversity.  Your best motivational story to bring them back into the world of hopeful thinking.  A tired and uncertain swimmer needs to know you care and that it is possible to succeed.  It is important that they know it has happened to other people like you.  You need to provide that glimmer of hope, the slightest possibility of a positive future, leading to a potentially a life-changing success.  Now you must prove your worth as a coach, what you say next will change their life.  So be ready.  I will share with you something that happened to me that can helps to motivate my swimmers and then I will share with you two famous swimming stories of success overcoming huge life hurdles.

When I was a young swimmer I was super competitive.  Annoyingly so.  Everything I did I had to win.  As young boy, my group of similar aged kids even competed to see who got changed the fastest.  In the pool I tried to win everything.  To my own chagrin, I was very small in stature so I had to be extremely tenacious to be able to win.  My size did eventually change around age fifteen, but as any ‘late bloomer’ will know, being small isn’t much fun.

Since I was hyper-competitive I never backed down from a challenge and sometimes beat the bigger boys, but mostly I didn’t.  This created a bit of a problem for me because if there is anything that a big kid doesn’t like, its being beaten by a really small skinny kid.  So I started to get bullied.  Many ‘errant’ breaststroke kicks seemed to find their way to my ribs and eventually I fought back.  For that I was rewarded with a solid fist to the nose.  Nothing hurts more than laughter and my pitiful swipe at someone twice my size, followed by my being pummelled, is funny for everyone, except one.   That hurt…a lot.  So I decided I was going to quit.

No one likes a bad cat

On my way home I told my Dad I was going to quit and told him why.  He was furious that I contemplated quitting but I was surprised more by his response.  In a fatherly way he told me that I was better than those boys and some day I was going to beat them all!  I was so surprised at his confidence in me that I never did quit and I went on to have a long career competing as one of the top swimmers in the world.

For me that story often gets some swimmers motivated to get back into swimming.  As a coach believe in them like a father. Some day you will achieve your goals, I believe in you and I will help you.  Now I will share two more with you:

Pablo Morales was the world record holder in 100m fly going into the 1984 Olympics but he was beaten by Michael Gross in the final.  He was devastated.  However he soldiered on and he continued to train well hard, but then under the spotlight of the 1988 US Olympic Trials, in his hugely competitive country, he failed to make the 1988 US Olympic team.  He missed his chance to win his gold medal because he didn’t even qualify for his county’s team. 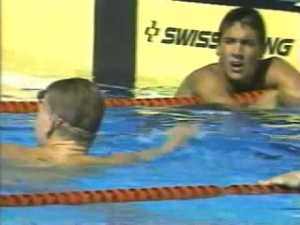 End of the line? Pablo Morales got silver in 1984 Olympic 100m fly final. In his home town pool, in the Mecca of swimming; California.

Most swimmers would give up at that point and Pablo did too. He turned to his studies but couldn’t live with the fact he had failed.  So he returned after a one-year hiatus and in 1992 finally got his place on the team.  I was not a personal friend of Pablo but I did race against him on a few occasions.  He likely wouldn’t remember though!  Pablo very rarely lost a race. He was unbeaten in his four year NCAA swimming career!  I wasn’t at the 1992 Olympics but I worked with Chris Martin, an American coach in the UK, and he was there in the stands close by Pablo’s Dad.  As Pablo won, his father stood up and didn’t clap.  He held up both arms in a blessing and repeating ‘my son’, ‘my son’.  The pride of a father seeing his son finally succeed after failed attempts can only instil a feeling of determination for anyone who hears that story.

Pablo Morales wins the gold medal in the 100 metres Butterfly at the 1992 Olympic Games. 3/100th over second and 9/100ths over third. Photo: Bob Martin/Allsport

I also like to share the long path that Vladimir Salnikov took to win his dream of true Olympic gold which spanned four Olympic games. As a young 16yr old distance swimmer at the 1976 Montreal Olympics Vladimir placed an admirable 5th place.  You will likely know that the next Olympics in 1980 was boycotted by many western countries and then four years later, predictably, the 1984 Olympics was boycotted by eastern block countries.  So even though Salnikov was the world record holder and world champion, his 1980 Olympic gold was tarnished by the fact ‘everyone’ was not there.

The Olympic gold in Moscow was not enough for Salnikov. Photo Credit Sergey Guneev

After Russia withdrew from the 1984 Olympics, Vladimir’s coach left him because he felt he was too old.  He was 24 years old.  Was this the end for this great distance swimmer?  It was not, he kept on for  another four years until 1988, with his wife as his coach.  The selection process was not by a trial but a selection committee.  Vladimir would be ‘given’ a spot on the Soviet team…but…only if he set a world record in the 800m free before the Olympics.  The-Soviet-powers-that-be felt he had no chance to win at the Olympics because he was too old so they set the bar extremely high.  He surprised everyone when he beat the 800 world record becoming the first man to go under eight minutes at that non-Olympic distance and got a chance to race at a fully attended Olympic games.

So twelve years and hundreds of thousands of meters later, with only his wife to coach him, he finally stood on the blocks in the 1988 Olympic 1500m final to race every top distance swimmer in the world.

Now at 28 years old, Vladimir was one of the oldest swimmers in the entire Olympic competition. The 1500 race was classic.  Salnikov churned up and down the pool holding 60s for each 100m.  Swimmers on both sides of him dropping off one by one, until finally there was only two swimmers.  This ‘old’ man who had all of the top times ever done, the only man to ever go under 15 minutes, but beside him a young West German swimmer called Stephan Pfeiffer.  Pfeiffer was no slouch.  He had won fourth place in the 400fr final in the previous Olympics.  So he too had a bone to pick.  A fight was on.

Salnikov was inches ahead two lengths to go but he kept his pace.  Then with 50m to go, he sprinted… and won by a body length.   When he got out of the pool the crowd began to chant his name; SAL-NI-KOV, SAL-NI-KOV, SAL-NI-KOV!  Since I was there I can tell you that is still gives me goose bumps when I think about it.

In the end we have to decide how to answer the statement; “Coach, I’m going to quit.”  So be prepared.  It may be time for that to happen to you.  Life is full of hurdles, some bigger than others but by fighting a good clean fight we can succeed.  Will you succeed?  Yes.  98 and 3/4 percent guaranteed.

I competed in the 1988 Olympics in Seoul representing Canada and coached in the 2000 and 2004 Olympics for Great Britain. I have a degree in History and a minor degree in Psychology from University of Calgary. I have travelled extensively and have been very lucky to see so much of the world while representing Canada and Great Britain at swimming competitions. I am very proud of the fact that I coached a swimmer to become number one in the world in the fastest swimming race in 2002. I pride myself in my ability to find new and interesting ways to teach swimming. I am an accomplished artist specialising in sculpture, I have another blog called 'swimmingart' where I publish some of my swimming drawings. I have three young children; all boys. I have recently taken up painting and yoga....but not at the same time. You can see my new paintings at: https://www.artgallery.co.uk/artist/gary_Vandermeulen
View all posts by Coach Gary →
This entry was posted in General Knowledge on swimming and tagged 100m Butterfly, 1500m Freestyle, Bullying, Chris Martin, Coaching, improve swimming, improving training, Michael Gross, motivation, Olympic Gold Medal, Pablo Morales, psychology, sports psychology, swim coach, swimmer, swimming, tricks of swimming trade, Vladimir Salnikov. Bookmark the permalink.