Your swimmers will ask to get-in early

Every once in a while we all come across something that works very well.  This is one of those things and I want to share it.  I have found that making board games into a poolside game will get swimmers very excited about swimming.  I use this Snakes & Ladders Game for our warm ups.

There are a few versions of this board game that I have made but the various deviations that are possible are endless.  So this is a template version and has no ‘sets’ to do on the board: you should make up your own. 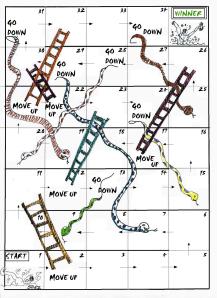 Snakes and Ladders without instructions on the board

This board game is laminated and can be played by lane or by person.  Basically, when you land on a square you have to do the set that is written in that square before rolling the dice and moving again.  By individual each swimmers rolls for themselves, by lane everyone does the set.  Both are excellent ways to get swimmers into the water and warmed up.

A large set of dice is needed and markers for the swimmers.  The variety of sets should be varied enough to get a good warm up and that will depend on the creative-ness of the coach.  Each lane will need their own laminated game board and enough markers for each swimmer if you intend on playing in a way that each swimmer has their own marker.

We have made up these variations to this same template:

We often give a little prize to the winner.  We made some rules which made things a bit easier; if playing by lane the dice can’t be rolled until all swimmers are finished the previous swim.  A coach must watch the dice being rolled.  A lane can’t start the set until everyone is in the water but if it is individual you can  start when you want.  To win the marker has to land on the final square exactly.  The coach can end the game after 20minutes if no one has won (or whatever is felt is a long enough time if it is used as a warm up).

As I said, there are some things that we all find that work well, this extremely simple board game, designed to have a general warm up in mind, will get your swimmers into the water before they are even supposed to get in.  But a lane can’t start until everyone in the lane is in the water…gets them all in so fast you won’t believe your eyes. 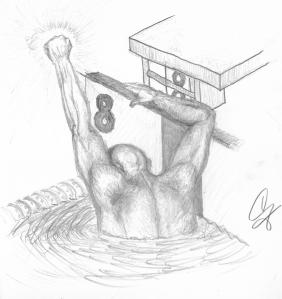 When a swimmer wins a final from lane 8 it is often called an ‘outside smoke’. This drawing is called ‘An Outside Smoke’.

I competed in the 1988 Olympics in Seoul representing Canada and coached in the 2000 and 2004 Olympics for Great Britain. I have a degree in History and a minor degree in Psychology from University of Calgary. I have travelled extensively and have been very lucky to see so much of the world while representing Canada and Great Britain at swimming competitions. I am very proud of the fact that I coached a swimmer to become number one in the world in the fastest swimming race in 2002. I pride myself in my ability to find new and interesting ways to teach swimming. I am an accomplished artist specialising in sculpture, I have another blog called 'swimmingart' where I publish some of my swimming drawings. I have three young children; all boys. I have recently taken up painting and yoga....but not at the same time. You can see my new paintings at: https://www.artgallery.co.uk/artist/gary_Vandermeulen
View all posts by Coach Gary →
This entry was posted in General Knowledge on swimming and tagged Coaching, improving swimming, improving training, learn to swim, make training fun, psychology, smooth swimming, sports psychology, swim training, swimmer. Bookmark the permalink.

5 Responses to Your swimmers will ask to get-in early