If you are like me it drives me crazy when people say they’re giving 110%. It bothers me because as an athlete and as a coach I know it isn’t possible. In fact when someone says they are giving 110% it makes me visualize some sort of fit or seizure. Not the result they were describing. To truly give 100% is not that ideal unless you are actually trying to reach failure. And also, giving 100% is very hard to do, both psychologically and physically. Failure is necessary to get adaptation in most instances and that is what the training sessions are for but in the ultimate performance field, the race to win, pushing yourself to failure is not what you want. What you what is something just less than 100%.

To be able to swim at top speed you must be able to control your stroke. Then you can maintain your best distance per stroke (DPS). Plus, once you have got your ideal DPS, you need to add your fastest possible tempo. Going 100% often makes a person lose physical control because they are pushing their capacity for doing something repetitively. Try this: open and close your fist  or scissor your fingers as fast as you can, for as long as you can. You must do this at 100%. Towards the end of your capacity you will notice something interesting; you can’t do it any more and there is a lot of variation in your open-ness and closed-ness of your hand.

Is this failure? Yes and no. It is the natural mechanism that happens in every aspect of adaptation in your body. Once you have reached the point where you can no longer open and close, and you begin to fail, your brain takes a leap of faith through adaptation.

Your brain’s recovery system, your immune mechanism, believes that reaching failure is something that will likely be repeating so then the next time your try it, once you have slept and ate well, allowing for proper adaptation, then you will be able to do that skill longer and faster. It’s magic.

This is a fairly big generalization, the failure point in sprinting, long distance sprinting, and each distance further than that, all have different zones of failure and adaptation. But for adaptation to happen in each case pushing at 100% will take you into failure and ultimately…adaptation.

Taking your body to the point of failure is a necessary strategy in training but this is not the best strategy in racing.  So perfect control, which also must be practiced repetitively, is the effort of ninety-nine percent.

To swim at 99% gives a swimmer, or anyone for that matter, who is under stress, a modicum of control that verges on Csikszentmihalyi’s ‘flow‘. Top speed, alertness, unlimited energy and a feeling of control without trying is the utopia for sport. Finding that place, that feeling of flow, is found somewhere in that space just less that 100%.

I was very lucky to find flow on a number of occasions in my swimming career.  The feeling of having complete control, while you feel like a passenger at the same time, is something that is beautiful.  But it’s not 100%. Riding a wave would come close to describing it.

I don’t want to come across like I was some sort of swim-god, I certainly was not, many of my contemporaries drove this point home repeatedly, but I did have this feeling from time to time.  When I knew that things were going well, I had prepared to a much higher degree than I ever had, was in perfect health, and was winning my races.  When all of those things were in place, and I think in particular being out front in a race, knowing that you still had a full tank in reserve, was a feeling that felt like swimming at 99%. It is a beautiful feeling and to describe it to others, as a coach must try to do, is a trick that I call 99%.

So if you are saying to your swimmers before their big races; give 100% consider the feeling of loss of control that you felt when you open and closed your fist as fast as you could. I think giving an effort of 99% is the best way to get your best performance. Train both with control and to failure. 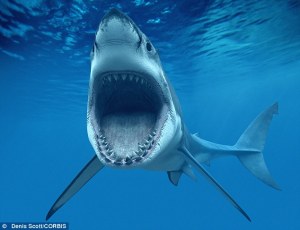 Unless you are being chased by a shark you should race at 99%. Photo credit on photo.

This article is dedicated to my friend Keltie Byrne. I spent many hours playing cards with Keltie at the Canada Games in 1985 and various other competitions that we both attended. She kicked my butt every time. I recently saw the show ‘Black Fish’ and I am appalled at the lies spread by the owners of captured killer whales. RIP Keltie.

I competed in the 1988 Olympics in Seoul representing Canada and coached in the 2000 and 2004 Olympics for Great Britain. I have a degree in History and a minor degree in Psychology from University of Calgary. I have travelled extensively and have been very lucky to see so much of the world while representing Canada and Great Britain at swimming competitions. I am very proud of the fact that I coached a swimmer to become number one in the world in the fastest swimming race in 2002. I pride myself in my ability to find new and interesting ways to teach swimming. I am an accomplished artist specialising in sculpture, I have another blog called 'swimmingart' where I publish some of my swimming drawings. I have three young children; all boys. I have recently taken up painting and yoga....but not at the same time. You can see my new paintings at: https://www.artgallery.co.uk/artist/gary_Vandermeulen
View all posts by Coach Gary →
This entry was posted in General Knowledge on swimming and tagged Coaching, coaching drills, Freestyle, freestyle timing, improve swimming, improving swimming, improving training, learn to swim, make training fun, principle of specificity, psychology, smooth swimming, sports psychology, swim, swim coach, swim technique, swim training, swimmer, swimming, swimming technique, training, triathlon swimming, tricks of swimming trade. Bookmark the permalink.