The most common issue I see in breaststroke is a style of stroke that can only be called  Granny  Breaststroke.  I call it this because the stroke holds the head position very high like a Granny who doesn’t want to get her hair wet.  It causes a huge amount of resistance and is very difficult to do even if you have a good kick.  It is important to know what the different styles of breaststroke are from a historical perspective.  In the video link below (bottom of page) you will see some of the most famous breaststroke swimmers and their styles from 1984 up to 2008.  I have picked some races that show contradictory styles.

Victor Davis.  When Victor was swimming it was still a rule that your  head could not go under the surface.  You can see his amazing ability to make a wave-style stroke even without putting his head below the surface, he was also a Canadian record holder in 200m Butterfly.  Victor learned the skill of riding his own wave.

Vlad Lozik & Joseph Szabo: In the 200m Breast in 1988 Olympics there were some interesting changes taking place in swimming breaststroke.  Lozik goes out very fast in the beginning of the 200m race.  Szabo begins to take the lead and you can see now the more efficient style coming to the fore.

The next four years brought more of the same style of swimming by Hungarian coach Joseph Nagy who put his finger on the wave stroke and began to methodically train swimmers in this style.  Szabo was coached by Nagy.

Roman Sloudnov:  A world champion with a Granny style was contradictory to the wave style but still the fastest in the world. So it certainly shows that there are examples of swimming differently than the head down wave style.  However you can still see the wave from the shoulders. 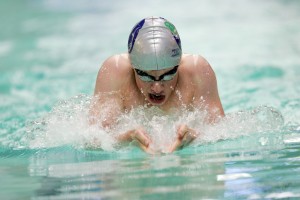 This picture shows good timing similiar to the wave style taught by Joseph Nagy.  The head position is leaning forwards and hands driving forwards.  This swimmer is about to drive hands straight forwards and head down causing the hips to come up.

In the powerful kick of a great breaststroke swimmer, you will notice that the kick does not ‘finish’ with the feet snapping together.  The feet slice towards eachother and then sweep upwards.  This is distinctly different that ‘snapping’ feet together.

Ed Moses: his style shows the dive into the front of the stroke very well and you can see that he is under the surface so far that he has clean water above him.

Kosuke Kitajima: his style is a beautiful evolution of the two dominant styles, the flat style of high head position and the wave style.  His head position gets down but he does not make a deep wave dive.  What is very obvious is the way that he kicks is NOT snap feet together but snapping in a circle.  His coach noticed his impressive ankle strength at a young age.  The kick has four parts:

Two coaching falicies are show to be distinctly incorrect by watching Kitajima’s kick: in the recovery phase and moving into the kicking back phase the knees do bend and make a right angle.  Secondly the feet do not snap ‘together’ but snap upwards.  Kitajima has a stroke that has taken the powerful horizontal Granny style and the fluidity of the wave style and squashed them together.  Amazing.

I competed in the 1988 Olympics in Seoul representing Canada and coached in the 2000 and 2004 Olympics for Great Britain. I have a degree in History and a minor degree in Psychology from University of Calgary. I have travelled extensively and have been very lucky to see so much of the world while representing Canada and Great Britain at swimming competitions. I am very proud of the fact that I coached a swimmer to become number one in the world in the fastest swimming race in 2002. I pride myself in my ability to find new and interesting ways to teach swimming. I am an accomplished artist specialising in sculpture, I have another blog called 'swimmingart' where I publish some of my swimming drawings. I have three young children; all boys. I have recently taken up painting and yoga....but not at the same time. You can see my new paintings at: https://www.artgallery.co.uk/artist/gary_Vandermeulen
View all posts by Coach Gary →
This entry was posted in Breaststroke and tagged breaststroke, Coaching, coaching drills, head position, improving swimming, improving training, learn to swim, make training fun, principle of specificity, skulling, smooth swimming, swim, swim coach, swim technique, swim training, swimmer, swimming, swimming kick, swimming technique, tricks of swimming trade. Bookmark the permalink.