In 1984 when Rick Carey won the 100 back at the Los Angeles Olympics, I was transfixed by his underwater kick. I was a mainly a backstroker then so I watched carefully.

Carey came up from his breakouts ahead in every race. In the 100m and 200m back races and then added a third gold in the medley relay. I knew I had to learn to do that.

I rewound his swims over and over until the VHS was in danger of getting stretched. His underwater kick was not the typical alternating ‘back’ kick of the day but a dolphin kick! Wow. Something new! 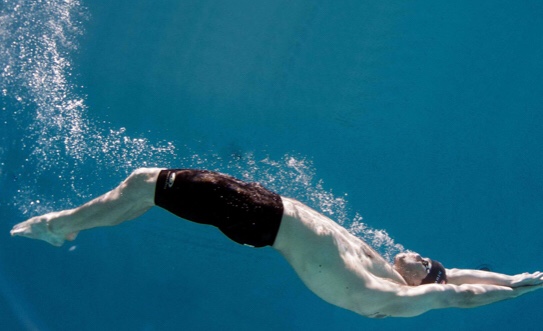 I was watching this at Lake Bonavista in SW Calgary with my teammate Mark Tewksbury. Mark obviously took it to heart better than I did because four years later in 1988 he was in the final of the 100m backstroke. I was cheering him from reserved seats in the stands with my other team mates on the Canadian Olympic swim team (I had switched my specialty to middle distance freestyle 200 & 400).

It would seem that quite a few swimmers and coaches watched Rick Carey in 1984 because the 100m backstroke race changed completely between 1984 and 1988…it had become an underwater dolphin kick race!

Not good news for Tewksbury. This new style was about dolphin kicking on your back in addition to backstroking, a very specialised kick, and kick phase was getting longer and longer; 66%! 60m of dolphin kick and 40m of backstroke.

The world record had been broken five times in the Olympic season 1987/1988. Igor Polyansky broke the world record three times and then twice by American Dave Berkoff at the US Olympic Trials. Canadian Sean Murphy was two hundredths off of the world record at the Canadian trials. This was leading to an international showdown in Seoul; the first Olympics since 1976 that included all countries.

In the American trials Berkoff showed his hand but Polyanski’s swims were a bit of a question mark. Maybe he did dolphin kick maybe not. In the pre-internet-world, swimmers did not know how far swimmers were going underwater on the first 50m, unless they saw it. Speculation was rampant because who would you believe? But without question we knew that Berkoff had begun to stretch out his underwater phase and broke the world record twice at the American Olympic Trials. This was now the standard, only weeks before the Olympics; emerging on top of the water approximately 40 metres on first 50m. Then returning off of the 50m turn he put in another leg-burning effort of about 20m. He set the world record in heats and finals at US Trials.

In Seoul Berkoff used his underwater phase to break the world record in the preliminaries, recording 54.51. It seemed Berkoff had this race sewed up having lowered the world record in his last three races. But other coaches and swimmers were watching…closely.

Daichi Suzuki, who placed 16th in both the 200back and in the 100back in 1984, was already a good backstroker but he was one of those few swimmers who had an excellent dolphin kick too! An ideal candidate for this new morphed event. He had not shown his cards yet!

In the final, Berkoff used the technique again, he was leading Japan’s Suzuki and Russia’s Polyanski by only a body length at the turn. All were using the long underwater phase now. Berkoff was a hunted swimmer, there were other swimmers capable of huge dolphin kick lengths and breath holding. They now showed their cards!

From my spot in the stands the race looked like the four middle lanes had missed their race! People in the stands stood up to see where the swimmers were. One by one the outer lanes emerged, after each swimmer came up a loud ooooh sounded from the stands, each time louder until Berkoff came up at 45m to a cheer! Then back under water on the turn, so the same thing happened, the outside lanes popped up and then one by one the inside lanes emerged. With 25m to go all swimmers were finally swimming backstroke.

The other swimmers in the outside lanes were not in the race, too far behind to challenge.

Berkoff was obviously a good backstroke swimmer but Polyanski and Suzuki were better. Both took a page out of Berkoff’s book, employing the long underwater first leg, chopping Berkoff’s advantage to one meter. They had quickly adapted, maybe even changing their race plan on the day!

Then it started to happen…Berkoff’s lead shrank. He must have felt the strain of such huge underwater segments. In backstroke you can see your competition coming on so it’s a bit of a mental game. Suzuki began to close in on a fading Berkoff. Polyanski too closed in. Then all three lunged for the touch. 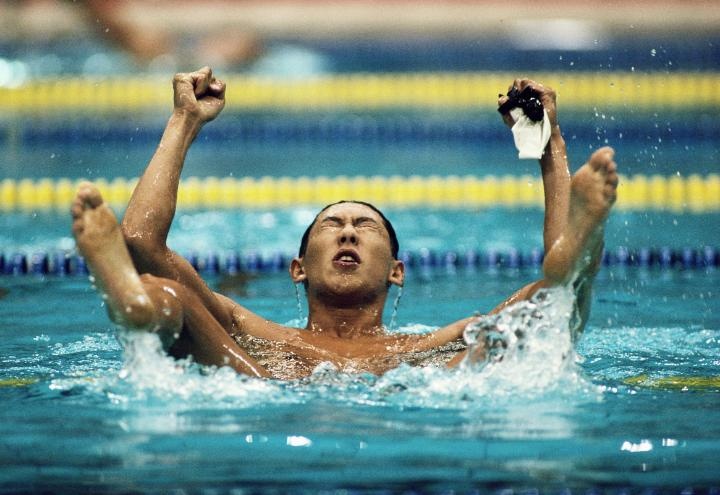 Suzuki won to Japanese jubilation! He waited to play his underwater prowess until the finals and it paid off in gold! Polyanski and Berkoff, multiple world record holders now stood on the side spots on the podium.

In fifth place was Tewksbury. After the 1988 Olympic Games he was gifted with a new rule for backstroke; 10m maximum of dolphin kick (extended to 15m shortly after). Then true backstroke swimmers came back to their forte and Tewksbury was 1992 champion.

Dolphin kicking was not forgotten though, now dolphin kick is an important part of every race and has become known as the fifth stroke.

I competed in the 1988 Olympics in Seoul representing Canada and coached in the 2000 and 2004 Olympics for Great Britain. I have a degree in History and a minor degree in Psychology from University of Calgary. I have travelled extensively and have been very lucky to see so much of the world while representing Canada and Great Britain at swimming competitions. I am very proud of the fact that I coached a swimmer to become number one in the world in the fastest swimming race in 2002. I pride myself in my ability to find new and interesting ways to teach swimming. I am an accomplished artist specialising in sculpture, I have another blog called 'swimmingart' where I publish some of my swimming drawings. I have three young children; all boys. I have recently taken up painting and yoga....but not at the same time. You can see my new paintings at: https://www.artgallery.co.uk/artist/gary_Vandermeulen
View all posts by Coach Gary →
This entry was posted in Backstroke, General Knowledge on swimming and tagged Coaching, improving swimming, improving training, Mark Tewksbury, principle of specificity, psychology, smooth swimming, sports psychology, swim, swim coach, swim coaching leg kick, swim technique, swim training, swimmer, swimming, swimming kick, swimming technique, training, tricks of swimming trade. Bookmark the permalink.